This article was published earlier this month in the newspaper of the Brooklyn Diocese, The Tablet, and written by Bishop DiMarzio.  Enjoy! 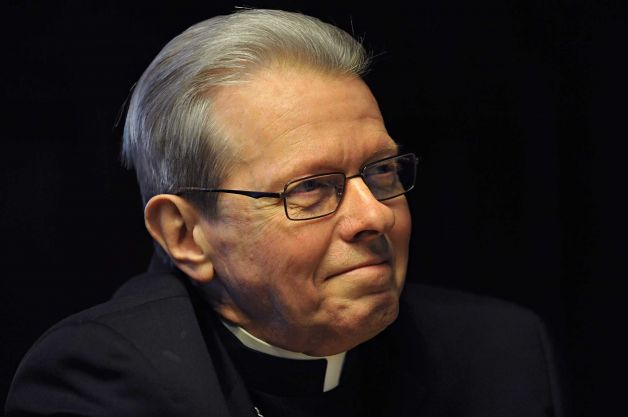 My dear brothers and sisters in the Lord,

With joy, and yet some regret for the loss to the Diocese of Brooklyn, I write today regarding the nomination of Msgr. Edward Scharfenberger as the 10th Bishop of Albany and am pleased to offer some reflections on his life and ministry in Brooklyn and Queens. The Diocese of Albany is key to the work of the New York State Catholic Conference, which is located in Albany, as it has direct contact with our Governor and State Legislature.

Msgr. Scharfenberger is uniquely fitted for this position in his Episcopal ministry given the importance of the public policy issues which we are confronted with daily as the Bishops of the Province of New York. There are many other qualities that Bishop-elect Scharfenberger will bring to his Episcopal ministry. As both a canon lawyer and civil lawyer, he can be truly judicious in making decisions and circumspect in passing judgment, which are overall qualities that are necessary in the Episcopacy today. Never fast to decide, however, once a decision is made, he carries it out. This is also a wonderful gift in administration today. Snap decisions usually are regretted at a later date. Bishop-elect Scharfenberger, fortunately, does not have that characteristic.

Over the years since his Ordination to the Priesthood in 1973, Bishop-elect Scharfenberger has held many responsibilities in the Diocese of Brooklyn and has dealt with them all very well. One that most likely is not known to many is that he was the principle author of most of the Editorials of The Tablet over the past 10 years or more. His insight and ability to analyze issues and then to communicate them in a way which is understandable to all is truly remarkable. It is my hope that he continues to use this gift in his diocesan paper in Albany to inform the people of his new diocese of his insights and feelings into matters theological as well as political.

Among his many gifts is this ability to speak various languages. His fluency in German, Spanish and Italian, as well as the ability to communicate and read in Polish, is truly an amazing linguistic gift which came in handy in his former parish at St. Matthias in Ridgewood. While the Diocese of Albany is not as linguistically complex as that of Brooklyn and Queens, he certainly will be able to use some of his languages, especially Spanish, for the newcomers to that area of New York State.

The Diocese of Albany is far flung, covering 10,419 square miles of New York State. Historically, it is one of the earliest dioceses established in the state in 1847 at the State Capital, but it has the challenges of a diminishing population. The economic down-turn in upper New York State has occurred over many years, and it does not seem that there will be a turn around in the near future. This has affected parish life with lack of candidates for the seminary given the smaller population. I am certain that Bishop-elect Scharfenberger will address this issue as he served as our Vicar for Planning and oversaw, with our then-Vicar General Bishop Frank Caggiano, the Christ Jesus Our Hope program where parish consolidations have been accomplished with great success and little dissension.

On a more personal level, when I was informed by the Nuncio, Archbishop Carlo Maria ViganÃ², that the then-Msgr. Scharfenberger had been asked by our Holy Father, Pope Francis, to assume the responsibilities of the Diocese of Albany, I called Bishop-elect Scharfenberger and asked to see him personally to congratulate him and present to him a special gift of a brand new zucchetto, which is essential gear for bishops, and a pectoral cross which I had just received as a gift, so that he could use these symbols upon the public announcement of his nomination. The Auxiliary Bishops of Brooklyn and myself have joined together and will present the Council Ring, known as such because it was a gift to the Bishops during the Second Vatican Council, to Bishop-elect Scharfenberger. This gift is a token of our solidarity with him in the Episcopacy and symbolized his marriage to his new diocese in Albany, and we are pleased to present this to him are a token of our esteem and remembrance.

We are certainly fortunate here in Brooklyn and Queens to have many capable and holy priests who have been selected to carry on the Apostolic Ministry. I know that you join with me in wishing Bishop-elect Scharfenberger well and accompanying him with our prayers as he puts out into the deep on a new adventure with new and multiple responsibilities in the Diocese of Albany.