As we celebrate the final weekend of our entire Church year, it stands as a kind of summation to all that we’ve encountered during these last 52 weeks in our liturgies.  In the endthis end of the yearwe are presented with the final meeting of Christ and Pontius Pilate.  The Roman Procurator stands face-to-face with the King of the Universe.  They are having a conversation: Pilate is agitated by the circumstances; Jesus is exhausted from the first twelve hours of his passion, but surely his eyes glow with the love and determination that had led him to this meeting.  For he came to dwell among usamong Pilatein order to save usto save Pilate’s soul.  And now providence has brought them together.

While Jesus is eager to draw this Roman patrician close to his heart; while all the conditions are right for Pilate to detect in Jesus the God for whom his own heart longsâ€¦he doesn’t.  He is in the same room with Jesusconcentrated & without interruptionspeaking with Jesus aloneâ€¦yet, he remains unmoved, untouched.

“Everyone who belongs to the truth listens to my voice.”  Here Jesus teaches us the secret to intimacy with God.  And isn’t this the great summation of the mission of the Church?  Isn’t this why we have come to believe and have worshiped together throughout this year?  And this is the secret: whoever lets himself be led by what is true will be drawn into communion with Christ and will hear and heed God’s ceaseless invitations to follow him more closely. 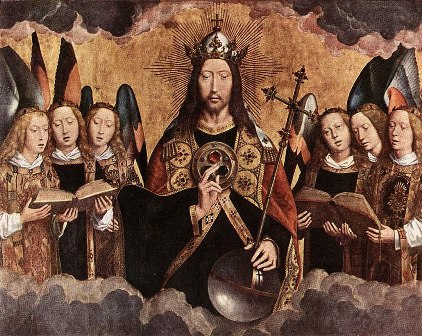 But being led by truth requires humility.  It requires recognizing a higher authority than oneself.  Here’s the surmountable challenge: if I am obliged to discover, accept, and conform to what is objectively true, thenin truthI am not autonomous, I am not the master of my universe, I am not God.  And such an act of humility is very difficult to make, because our fallen nature tends toward pride, towards self-sufficiency, control and dominance.  So, to resist such tendencies requires courage.  It takes courage to obey the truth and expose oneself to the burning love of Godbut that is what it is: love.

Our friendship with Christday in and day outis not easy; if it were, we would clearly not be pursuing friendship with Christ.  Christ’s own daily lifeespecially seen in today’s gospel, is furthest from easy.  By befriending Christ, Pilate would risk being dethroned and marked as an enemy of the Emperor; he would risk being ousted by the Jewish authorities, hauled back to Rome for his own execution. Look to the saints, the martyrs, the holy ones: ease is not a condition of following the Lord of the Universe: humility, courage and truth are the conditions that lead to a universal Kingdom of justice, love and peace: that same universal Kingdom for which Christ is the King.

So, may our Lord grant each of us abundant graces that we will need in this new year: to listen to Him, to accept Him, and to conform ourselves to Him as we seek to enter into His universal Kingdom.